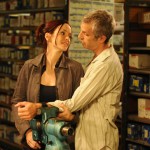 If there was any doubt that Renee Walker is a Jack Bauer kind of gal, it evaporated last week when the 24 character cut off a Russian mobster’s thumb.

“Gosh, I loved it,” says Annie Wersching, when she learned what her character was supposed to do. “I was a huge fan of the show from the very beginning, so I was immediately like, ‘Oh, my God, I kind of have a hacksaw moment.’ ” (Renee used a small power saw; Jack, as fans such as Wersching know, used a hacksaw to cut off the head of a man he killed in Season 2.)

Even before Renee went digital, fans of 24 (Fox, tonight, 9 ET/PT) were calling her “Jacqueline Bauer” for the power and intensity she has shown in bringing wrongdoers to justice. Kiefer Sutherland, who plays the iconic Jack, credits Wersching for pulling that off.

“If she’s sitting absolutely still, even if her eyes aren’t moving, there’s a fire you can feel in there. There’s a real energy,” Sutherland says. “(Executive producer) Howard Gordon’s idea, and what I thought would have been really interesting, was to have a female kind of Jack Bauer, someone who can handle themselves that well, (and) they would have a chemistry, because there are very few people that can do those kinds of things. All of that, she’s just amazing.”

St. Louis native Wersching, 32, who has a degree in musical theater, appeared on General Hospital and had numerous TV guest roles when she was cast in Company Man, a pilot made by 24 veterans. “I played the wife of the lead. It could not have been more different from Renee. She was quiet and meek.” That led to the Renee audition. When she got the role, she says she was told, “We had no idea that person was in there somewhere as well.”

Wersching, who grew up playing sports and performing Irish dance, has the physicality needed for a demanding action role, Sutherland and Gordon say.

“A lot of the stuff with fights and moving around (is) more like choreography than anything else, and just so fun,” says Wersching, who acted in an independent film, Below the Beltway, between her two 24 seasons.

Renee started last season as a law-and-order foil to Jack, before adapting more of his hard-edged approach to law enforcement. By the time she returned last week, she had lost her boss and her job, and appeared on the verge of losing her soul. Brought back in for an undercover assignment, she doesn’t seem to care if she lives or dies.

“She’s a wild card, and that can be more dangerous, because you don’t know what she’s going to do,” Wersching says.

Life only gets messier in upcoming episodes, as Renee risks her life, and Jack, who had planned to move far away from the Counter Terrorist Unit, does all he can to keep her alive. “That was really Jack Bauer’s involvement this year, Jack’s perceived responsibility for who she is and what she’s become that brings him back into this story in a really charged way,” Gordon says.

Whatever the relationship is, it won’t be traditional, Wersching says. “She has absolutely nothing to live for at the start of this day and, throughout, Jack is trying to help her, trying to be there for her,” she says. “It’s never going to be your stereotypical romance. It’s going to be their own twist on things, but I think the question definitely comes up as to whether or not he is for her something to live for, and her for him.”