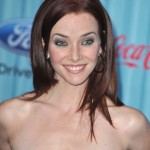 It was the shocker of shockers for 24 fans. As soon as Jack Bauer (Kiefer Sutherland) and Renee Walker (Annie Wersching) wrapped their hot love scene in the April 12 episode, Agent Walker took a sniper’s deadly bullet. A little more cuddling might have been nicer, Wersching tells TVGuideMagazine.com.

What a way to go, huh?
Right? It was so sad because Jack and Renee were finally in a good emotional place after so much turmoil. It was almost like, ‘Look what could have been.’ They had taught each other so much and now…she’s gone.

Was it emotional for you personally?
Are you kidding? I knew it was coming from before the season began, but I was bawling after and then I bawled again when I watched the episode. It wasn’t about losing a job or anything. I just really felt sad for Renee and Jack even though I know they’re just characters. At one point, I looked over at my friends with tears in my eyes and went, ‘Hey, does this make me a crazy person?’”

What kind of day-after reaction did you get from fans.
Oh, my gosh! More than I could have ever imagine. That night there were hundreds and hundreds of messages online from fans. The first slew of them was just like, “NOOOOOOO!” All caps and lots of expletives. Then people told me they were crying. Even men said, ‘I can’t believe it. I never cried watching TV but this did it.’ Other people were pissed.

That episode was a good one. What was it like to do the love scene with Kiefer?
Absolutely and completely terrifying and awkward for both of us. It made me feel better Kiefer was as scared as I was. But it was extremely tough. You hear about how awkward these things are, but this one was extreme. Only a tiny portion of it aired but we spent the entire day making out on camera. It’s just so bizarre making out with one of your best friends.

Will there be a 24: Uncut DVD or something?
[laughs] Gosh, in a way I hope so. I had gone to the gym for a bunch of weeks beforehand and we were really proud of the scene. Let’s put it this way. Somebody has the footage somewhere so I’m sure it might see the light of day at some point.

Then you find out the next day that you’re pregnant in real life?
Yes. No relation, of course. [Wersching, 33, married actor Stephen Full last year]. The baby is due in August and I’ll always remember having morning sickness while carrying a gun.

What’s next for you?
Being a mom for the moment. I didn’t want to start another show knowing I’d have to hide my pregnancy, so I don’t have anything lined up right now. But I can’t wait to see what other kinds of butt-kicking roles come my way because of Renee. I’ll really miss her.