Talent agent Donna Massetti, a native of New York City with a soft spot for musical theater, takes her seat for a revival of the 1960s musical Do I Hear a Waltz? at the Pasadena Playhouse.

She’s there for the entertainment, but scouting for new talent isn’t just a 9-to-5 job for Massetti. She’s been told by her business partner at FMS Talent Inc., Marilyn Szatmary, who already has seen the show, to keep her eyes on the blonde who plays the part of Jennifer.

Actress Annie Wersching, whose voice can be heard on the Do I Hear a Waltz? soundtrack, had made a recent move to Los Angeles in 2001 after touring with Anything Goes, which closed there. Wanting to see whether she could make it in Tinseltown, she took on work as an extra and auditioned for local shows.

“We thought she was lovely and found out how to get in touch with her,” Massetti says. “She certainly had a good look for this town… a commercial look.

There are a lot of good actors, but when you see the commercial look and talent together, you say, ‘That’s someone you want to work with.'”

That blonde – now a redhead – has joined the ranks of elite actors represented by FMS, including CSI: New York‘s Anna Belknap, as well as Emmy winners David Hyde Pierce of Frasier and Zeljko Ivanek of Damages. At 32, she is entering her second season as Agent Renee Walker on the 20th Century Fox Television drama, 24.

Easin’ down the road

To those who know the only child of Frank and Sandy Wersching, Annie’s theatrical success comes as no surprise.

“She is very organized about auditioning and getting ready… She treated this as a job. A lot of people treat this as, ‘Oh I’ll be discovered,'” says Sandy, an elementary school teacher who went on to own Surprise! Florist. “I still have friends who are 65 years old waiting tables waiting for it to happen. I didn’t want that for her.”

Acting, you might say, is in Annie’s blood. Her father, an instructor and director at Washington University, was a singer and actor who owned the St. Charles Theatre and Opera House before his daughter’s birth. As a result, she knew what an acting career entailed, says Sandy, who in 2008 moved to L.A. to be closer to her daughter.

Annie says her first memorable acting experience was as a Jellicle cat in the musical Cats when she was a fourth-grader at New City School in the Central West End where her family lived.

“Our music teacher was very ambitious,” she says, laughing. “It was literally like kids crawling around.”

But it was in sixth grade when the acting bug bit while performing a school-based production of Broadway hit, The Wiz. “It was so fun. I loved the community of theater,” she says.

Annie was introduced to Irish step dancing by Kay McWilliams, a native of Galway, Ireland, who helped care for Frank Wersching, who died when his daughter was 12. McWilliams, who Annie likens to a second grandmother, had a daughter who performed with the The Mayer School of Irish Dance’s St. Louis Celtic Stepdancers. Annie joined, too.

Performing, competing and winning trophies for 14 years, she qualified to compete several times at the Midwest Oireachtas in Ireland, ending her career in Irish dancing at the championship level. Those skills would come in handy later when she performed in And They Called It Ireland at the Fireside Theatre, a dinner theater in Fort Atkinson, Wis.

Annie says her dancing experiences helped her build the confidence she needed to perform before a live audience.

“I think it definitely, definitely helped with stage presence in general,” she says. “Back then no one smiled in Irish dance, and I was the one little girl who smiled.”

Annie Wersching interviewed by The Trades 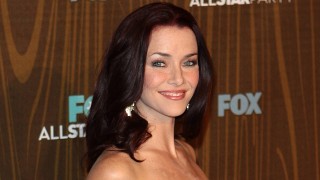