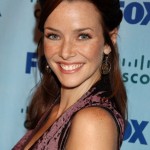 Television roles don’t get any better than Renee Walker on 24. Actor Annie Wersching has gotten buried alive. She went all Ace Hardware on a Russian bad guy and lopped off his thumb with a circular saw. She even had the audacity to stab Jack Bauer in the gut. And lived to tell about it—if not for another day, than at least for more hours within 24’s real-time format.

I spoke with Annie this week. It has been a monumental few days in the history of this historic show. Shooting is wrapping up today and Wersching spoke of what that means for her, the crew, as well as her hopes for a 24 movie sometime in the future. Just one thing: make sure you don’t say that 24 was cancelled.

You have done a lot of different kinds of acting, including live theater. How did the demands of 24 compare to some of the other projects you’ve been involved in?
It’s funny. I’ve been out here now about 7 or 8 years and it’s hard for me to even remember what live theater was like. 24 is such a unique show. I’ve done a lot of television but the real-time aspect, where we’re shooting over 10 months and actually only doing one day—it’s just crazy. Last season, from where Renee began in Episode 1 to where she ended in Episode 24 was such a huge arc. It’s really intense to try and remember and keep it all together in one day. By Episode 5 last season I was thinking, “Wow, it’s only been five hours and all of this stuff has happened.”

How do you make that work as an actor?
It’s a little challenging. Luckily with 24, for the most part, each moment is so intense and your objective is all about that moment right then. So luckily I don’t have time to really freak out and think, “Oh does this actually work because three hours ago Renee was doing this.” There’s no time to freak out about future things or past things because of what you’re dealing with in that exact moment. That’s actually something that really helps the actors.

And do you trust that the audience is able to suspend their disbelief about how much goes on?
When you’re getting across New York City in ten minutes, you know for the most part that the fans are very well-informed and if you spent the entire episode just in the car, it’s not going to be a very good episode.

Renee Walker seems to have struck a real chord with 24 viewers—maybe more so than any other woman character on the show except for Chloe since the days of Nina. What are people responding to about Renee?
I was a fan as well and I knew it would be a difficult task to come into 24. Just to come in as a female agent in general and then to come in as a female agent with some sort of tie to Jack. I knew that would be rough. It really helped in the beginning of Season 7 that right away they put her in the field with Jack and she held her own. What makes her so interesting is that she can go in one moment from cutting off a thumb or kicking a guy’s ass, and then in the next moment you actually see—kind of in the way that Jack does—you still see that things affect her. Whereas a lot of strong women on TV, you don’t get all of those dimensions: If she’s strong, that’s all you see. But you’ve had all these big, lengthy conversations between Renee and Jack about what they were doing and what they needed to do for the greater good.

From the start there has been a natural ease between Renee and Jack. How did you and Kiefer Sutherland establish that? Was it difficult?
It did actually come pretty naturally… It’s a very, very big deal and especially if you’re going to work closely with Kiefer there’s got to be a lot of trust there. For whatever reason, right off the bat, it worked. We’re both pretty down-to-earth and got along right away. You have to know that in order to have all of these scenes with him you have to show up so well-prepared and so invested in the show. Once he sees that, over the scenes that you do, he begins to trust you a little bit more and knows that you’re going to show up. And that he can count on you to be his counterpart in a scene.

There was a sense that the season got off to a bit of a slow start but that it has established real momentum over the the last three or four episodes. When you were working on this season, what was your sense of how it was progressing?
It’s interesting because last season Renee had such a huge arc from the very first episode to the last episode. And I was in almost every episode. This season is definitely different for me in terms of filming because I have more bursts of activity. But those bursts are bigger. When I was in, there would be four or five really intense Renee episodes and then that would die down… Last year I was in the FBI and the character always knew what was happening overall at the White House. And this year Renee is on her own with Jack. It was a little bit harder this year for me to get a grasp of what the overall arc and vibe of the season was going to be like. But definitely these last three or four episodes, for whatever reason, seem pretty old school 24. Which is so much fun.

24 has been a real legacy series for television: groundbreaking and revolutionary in so many ways. As the show moves to its conclusion, how protective are the actors, crew, and writers of that legacy?
It has been very important. Something that sort of bugged us in the media was when a headline would say that 24 was cancelled. Something about the word cancelled has been totally bugging us. I think cancelled is a word that fits a show that maybe makes it five episodes and gets axed. Or one season. But this is truly one of the most iconic shows around and we’re ending our long run. But cancelled? That word doesn’t seem to work, for whatever reason. It’s hard. It’s rough. Like you said, fans are so protective. The standard that 24 is held to is higher than at other shows. A weaker episode of 24 would be an amazing episode for a lot of other shows. We know there’s a pretty high bar to reach. I think it helps that there’s almost definitely a 24 movie. Some of the characters, Jack at least, will live to see another few hours. But it’s tough. I would say that everyone is very protective of the show and wanted to definitely go out on the highest note that we possibly can.

Do you think it was time? Do you think 24 will benefit by moving off of television and away from the real-time structure?
You don’t want it to come back season after season and have it slowly get worse. At the same time, a show that’s still pulling in the amount of viewers that it does—a new show would never be taken off the air with that amount of viewers. It’s just that it’s an expensive show to make. Like I said, it’s a hard one for me just being involved with the show, knowing all the crew, and being a fan of the show. It’s hard to accept that 24 is going to be over. I understand that it needs to go out on a high note but I’m biased and wouldn’t mind a little more.

What’s your sense of the fan reaction after the announcement?
Gosh, I would say that 99.7 percent are dying for another season. Every once in a while you have people who say, “It had a good run, let it end like this.” But I would say that the fans are so incredibly dedicated and so smart about the show. They just know everything and they definitely seem to want more. So having the 24 movie lurking out in the future somewhere is a nice thing to have in conjunction with the series coming to an end.

How would you describe the mood?
I would say it’s pretty sad. I’ve been there three years and two seasons—because of the strike it was actually about three years. But for the crew and for Kiefer, it has been nine years of their lives. They’ve been married, divorced, and had kids. Somebody has the number of how many kids were born during the run of 24. It’s pretty amazing. It’s kind of like a family breaking up. I’m sure a lot of people will still work together on future projects. But just the fact that production people are cleaning out their offices and things like that. That just… you’re used to seasons coming to an end and then you have a break for three months but you know you’re going to come back to it. It’s definitely sort of a quiet, a little bit of a downer on set right now. But there’s that feeling that every moment you play has got to be absolutely perfect. It’s that pressure that you feel knowing that these are the last moments. There’s definitely a little of that going on.

What should we look forward to?
This coming Monday is a pretty big one for Jack and Renee. I was actually surprised that they showed a little of it in the promo from last week. Like you said about the fans accepting her, it will be interesting to see how they will all respond to Jack and Renee sort of finally getting a little bit closer. For the most part I’ve heard good things. But then you have your fans who legitimately think that Jack Bauer loves them and that they’re going to marry Kiefer Sutherland and they want to push Renee off a cliff.

Speaking of cliffhangers, now that we know that shooting has wrapped up, are you going to tell us what happens at the end?
Uh, no.