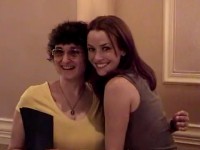 Annie Wersching starred as Amelia Joffe on the daytime soap-opera General Hospital throughout 2007. She had auditioned three years earlier prior to landing the role of Amelia which is when she started watching the show and got hooked. Wersching auditioned for the characters of Mary Bishop (losing to Catherine Wadkins) and Rachel Adair, a part which went to her Charmed co-star Amy Grabow.

The role of Amelia Joffe was temporarily played by Darby Stanchfield from April 24 – May 10th 2007 while Annie was filming the Company Man pilot for FOX. Amelia was popular with fans and the producers of General Hospital tried to sign Annie to a four-year contract which she declined. Wersching appeared in 80 episodes of the show, leaving to work on 24 as FBI Agent Renee Walker.