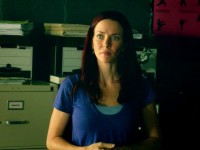 Samantha is described as an “agitated, frantic, and defensive” sister of a murder victim whose death is being investigated by Five-0. She eventually becomes a suspect when McGarrett learns that her brother recently fired her from his upscale restaurant.